CMC Mercedes-Benz W196 Monoposto, signed by Sir Stirling Moss, Limited Edition 65 pcs
The racing legend Sir Stirling Moss has ennobled a small, strictly limited edition of 65 CMC-class models of legendary Mercedes-Benz W196 Monoposto with his signature.
In 1954 and 1955 he was a driver in addition to world-class driver Juan Manuel Fangio, Karl Kling, Hermann Lang and Piero Taruffi the successful Daimler-Benz team, led by the famous racing manager Alfred Neubauer.
This car has a special meaning in the life of the race driver, because it attended him on his way into the annals of racing during the years 1953 to 1955.
The original signature of Sir Stirling Moss on this certificate guarantees the originality of the signed models and the limitation of this exclusive edition.
The original signature on a model makes it something very special.
Details of this Limited Edition Each model and certificate has been individually signed by Sir Stirling Moss personally
Technical data of the CMC-model:
Model details:
Description of the original vehicle: The Silver Arrow – one of the most famous racing cars from Mercedes-Benz. Still today, motor sport fans are enthousiastic about the Silver Arrow of the fifties.

This racing car is that famous due to lots of victories and very good second places in the year 1954 and 1955. Juan Manuel Fangio became word champion with this car in those two years. The drivers Karl Kling, Hans Herrmann and Stirling Moss came in second and third in several races with the Silver Arrow as well.
Technical data of the original vehicle: 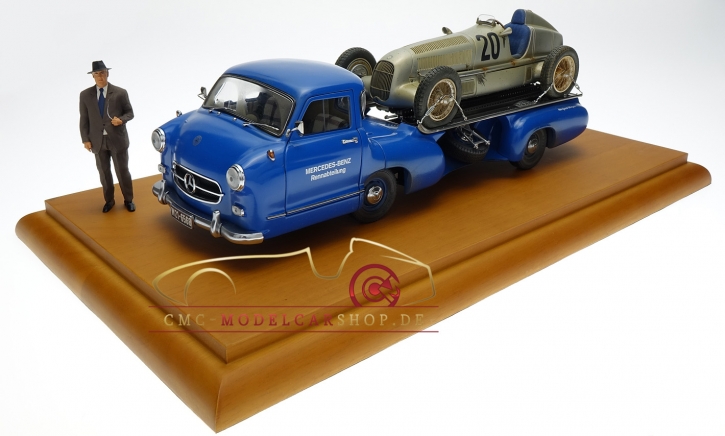