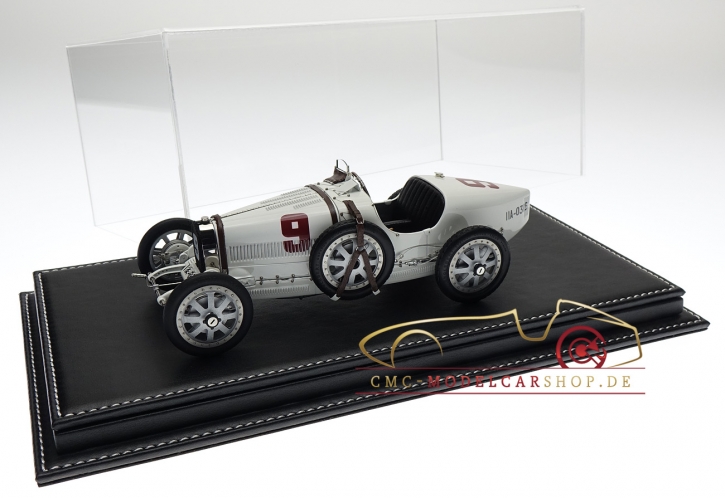 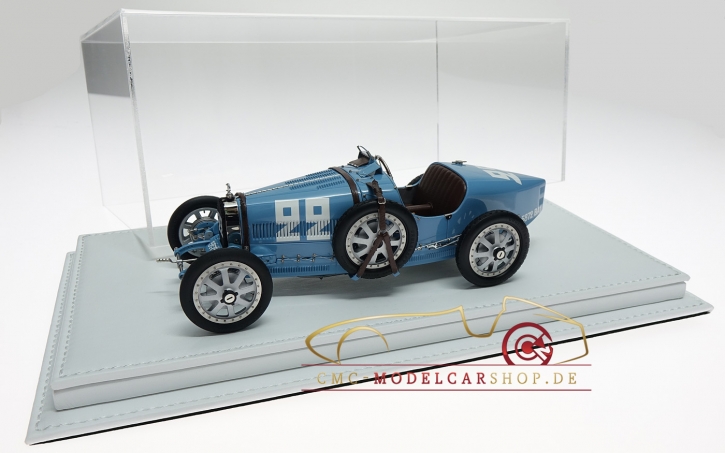 The SSK and SSKL types constituted a highlight of the legendary S-series that has exerted a continuing impact on the Mercedes-Benz marque. One may say, some cars belong to yesterday as much as they belong to today in that they are virtually timeless.

Technical data of the CMC model:
Model details:
Description of the original vehicle: The SSK is considered the most sporty and exclusive version of the super-charged six-cylinder racing sports cars from Mercedes-Benz’ S series. Short for “Super-Sport Kurz” (meaning Short-wheelbase Super Sport), the SSK debuted on race tracks in 1928, only four weeks after the SS (Super-Sport) model was introduced. Among its major modifications was a wheelbase curtailed by 450 millimeters to highlight its uncompromising nifty characteristics. This made the SSK an ideal choice for hillclimb racing.

Part of the legend of the SSK is that it was both a factory racing car and a customer vehicle. Some racing specifications, such as a more powerful compressor or a racing camshaft, were also available to private customers, while others were reserved for factory racing cars. It was common for private owners of an SSK to take part in races at weekends and use their two-seaters on weekdays as a means of transport in everyday life. Undoubtedly, the SSK was the ultimate supercar of its time.

The Mercedes-Benz compressor sports cars were initially developed under the leadership of Ferdinand Porsche. They first took the shape of a touring car in 1926, featuring increased engine power and a shortened wheelbase, and known as the Model K. The letter did stand for “Kurz” (short), namely, the shortened design for racing operations. K was preceded by the type designation S (Sport) in 1927 and SS in 1928. In mid-1928, Mercedes-Benz engineers shortened the Type S chassis to a wheelbase of 2950 millimeters and equipped the chassis with the new 7.1-litre SS compressor engine. This created the Type SSK (Super-Sport-Short), whose powerplant coupled with the compressor generated 200 hp. After Rudolf Caracciola won several important hillclimb races in the 1928 season, the factory decided to produce a small series of the SSK, which was initially meant to be a factory racing car only. From October 1928 it was included in the official sales program. By 1929, the power had been increased to 250 hp, whereas the racing touring cars of the factory team provided up to 300 hp with a larger compressor. In total, fewer than 30 customer SSKs were produced, and it was one of the most exclusive Mercedes-Benz ever.

People are used to seeing an SSK finished in a white livery. It has to do with the fact that the SSKs were nicknamed “White Elephants”, a reminder of the racing successes of the Mercedes-Benz factory team. The nickname also serves to bring back the racing scene from the past: the massive body of the compressor racing car and the deafening noise of the compressor under full load.

But there were more than factory racing cars on the tracks. The SSK was also sold to private customers who had a full range of color choices for the livery of their SSKs. In black, this SSK takes on a special elegance in its looks, as is shown by the CMC miniature.