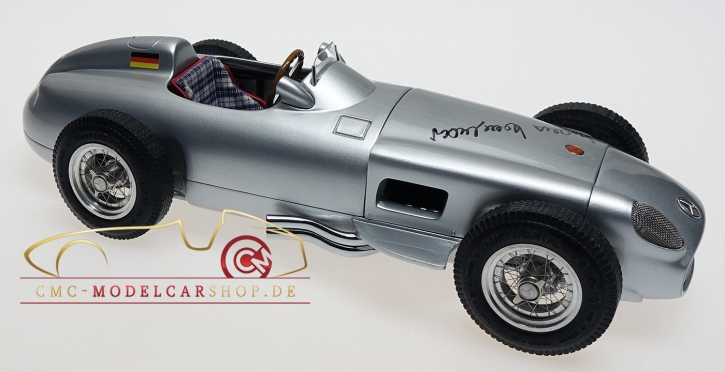 Technical data of the CMC-model:
Description of the original vehicle: The 1932 Monza Grand Prix was for racecars without weight or engine capacity restriction. It took place on the 10 km circuit that comprised the 4.5 km Pista di Velocita, a high-speed oval track and a 5.5 km asphalt circuit. The system of three heat races, rehabilitation (repêchage) and the final race was maintained. Competitors were divided into three separate groups of nine cars each to start in three separate heats. Each group had to cover 10 laps, consequently 100 km.

The heats were elimination races, whereby only the first to fourth placed cars were allowed to advance to the final race. The repêchage or habilitation was a 5-lap race over 50 km, which gave those drivers who failed in the heats a second chance, so nly the fifth to ninth placed cars of each heat were admitted to the repêchage. Its first four finishers, together with the first four finishers of each of the three heat races constitute the 16 best drivers to battle for 20 laps over 200 km in the final race. Alfa Romeo sent Nuvolari, Campari, Borzacchini and Caracciola, each in a new 2.6-liter P3 monoposto. The Scuderia Ferrari entered Alfa Romeo Monzas for Count Brivio and Taruffi. Bugatti brought in Varzi and Chiron for its 5-liter Type 54 model. Maserati entered Fagioli, Ruggeri, Minozzi and Ernesto Maserati for its new 3000 cc front-wheel-drive monoposti. There were also independent Alfa Romeo, Maserati, Bugatti, and Mercedes-Benz entries in addition to Earl Howe’s Delage, Biondetti’s MB-Special, Moradei’s 1.5-liter Talbot, to name just a few.

The number of spectators at Heat 1 were estimated to be 100 000. The Prince and Princess of Piedmont were guests of honor. Only six of the nine drivers appeared at the start. Caracciola’s red Alfa Romeo instantly shot away at incredible speed, and after the first lap he had already established a clear lead. None of the other competitors could get close enough to threaten the German. His time for the 10 laps was a new record of 33m24.2s
Greatest interest centered around Heat 2, where a heated battle was anticipated among three strong drivers: Nuvolari, Chiron, and Fagioli, the Monza record holder in a 16-cylinder Maserati. After the race started, it appeared quite uncertain whether Nuvolari or Fagioli would gain the upper hand. Lap after lap, both cars passed the grandstands as a close pair. But on lap 6, Nuvolari went off the track and had to stop for a new front wheel, which relegated him to a second-place finish. Heat 3 involved competition between two Alfa Romeo teammates Campari and Borzacchini. From the very beginning, Campari got into the lead, which he retained until the end of the race. Borzacchini came second.

It was time for the final race, which was scheduled for 3:45 pm, but the Alfa Romeo P3 monoposti were not there on the starting grid. It seemed the Alfa Romeo team was standing behind Nuvolari’s demand that Fagioli be punished for intentional hindrance causing him to go off the track in Heat 2. But eventually a good sense prevailed, persuading the Alfa Romeo team to withdraw its protest, and the race started.

At the start, Nuvolari immediately pulled into the lead, followed by Borzacchini, Caracciola, and Fagioli. After five laps, Nuvolari was leading Caracciola by merely two seconds. On lap six, Caracciola managed to get past Nuvolari for a short time, but the Italian soon moved ahead of him again. After lap ten through lap nineteen, the two were so close together in the lead that it was uncertain which one was actually leading or in a better position to win. At this critical juncture, Nuvolari encountered a fuel pressure problem, which made him decide to pit for fuel, only to be waved away without refueling by Vittorio Jano. This pit call was costly, relegating Nuvolari to a third-placed finish. Rudolf Caracciola finished first ahead of Fagioli with a new record of time.